There are actually 200 different species of Iris, and at least five of these are thought to be native to Texas. The Biota of North America website lists nine species that grow wild in Texas, so there is, apparently, some controversy about the Iris native to Texas.

Iris Brevicaulis, Iris Xflexicaulis, Iris Fulva, Iris Germanica, Iris Giganticaerulea, Iris Pallida, and Iris Pseudacorus, Iris Virginica, and Iris Xiphium are the scientific names of those listed by the Biota website as being native to several areas of Texas.

The common names of those few Texas Natives that are not in dispute might be more familiar to most gardeners. They are the Zigzag Iris, the Copper or Red Flag Iris, and the Giant Blue or Giant Blue Flag Iris; Iris Hexagona, or the Dixie Iris, and Iris Virginica, the Virginia Iris, are also disputed Texas natives. Most of these native beauties seem to favor cooler, moist areas, especially around the coastal regions.

The benefit of planting anything native to the area is that the existing conditions usually provide what the plant needs to flourish, so there is no need to change the nature of the soil, watering patterns (assuming no unusual conditions such as flooding or drought) or type of fertilizer.

All 200 species of Iris manifest their collective and individual beauty in a rainbow of different colors. In fact, the name 'Iris' is the Greek word for rainbow, as well as the name of the Greek Goddess of the Rainbow, "...one of the best assignments on Olympus", according to Ray Allen, founder of American Meadows.

The Iris is a favorite of gardeners all across America and from Europe to Asia, and a favorite of many artists and royal families all over the world. Vincent Van Gogh created several paintings of Irises, (one of which auctioned for over $53 million, also according to Ray Allen). Other artists, including Renoir, Monet, Cezanne, DaVinci, Gauguin and Durer, as well as some lesser-known artists, chose the Iris as their subjects.

Many royal families of both England and France demonstrated their love for the Iris by using its image repeatedly: on their coats of arms, embroidered on royal gowns, as a symbol of power (by Louis XIV and the French Bourbon Kings), and to adorn royal banners with a symbol called the "Fleur de Lys", a rather geometric symbol modeled after the Iris flower. The Iris is on the flag of Quebec, the Canadian city founded by the French, and it appeared on the French flag itself before the French Revolution.

The Iris is not only beautiful, it also has medicinal value. The flower is sweet-smelling and has sedative qualities, making it suitable for aromatherapy treatments and for perfume. The rhizomes, which some Irises have instead of bulbs, can be processed so that the resulting compounds are also very sweet-smelling. These rhizomes have also been given to teething babies, to ease their pain! The roots have been used in medicines for stomach issues, skin infections, dropsy (an outdated name for soft tissue swelling, which today might be called edema, according to Medicinenet) for syphilis, and even today as a liver purge. As with other medication, only use the Iris under a doctor's care; the rhizomes, and possibly other parts of the Iris, can be toxic.

Irises are very easy to grow, perhaps contributing to their popularity among gardeners. They are either "Bearded", "Beardless" or "Bulbous". The six different types of Bearded Irises, as well as the Beardless ones, have rhizomes instead of bulbs, which connect each tall flower right under the surface of the earth, and which spread to create larger and larger groups of flowers. These must be divided regularly.The Bulbous Irises have bulbs, like daffodils or tulips, and do not spread as rapidly as those with rhizomes. All types of Irises have lovely flowers with at least three petals atop tall stems, and provide a wonderful source of nectar for pollinating bees.

It is worth checking out the great assortment of Irises at your local botanical gardens, or even at the florist shop, where you can get more information on the lovely Iris.

Scent & Violet, flowers and gifts is a full service florist in Houston, TX offering flower, plant and gift delivery in Houston, Katy, Richmond, Fulshear, Sugar Land, Stafford, and Bellaire. We aim to create fuss-free, everyday shopping source for flowers, plants, and gifts. It is our belief that we can create better relationships through gifting, better environments through plants, and better state of mind through flowers. 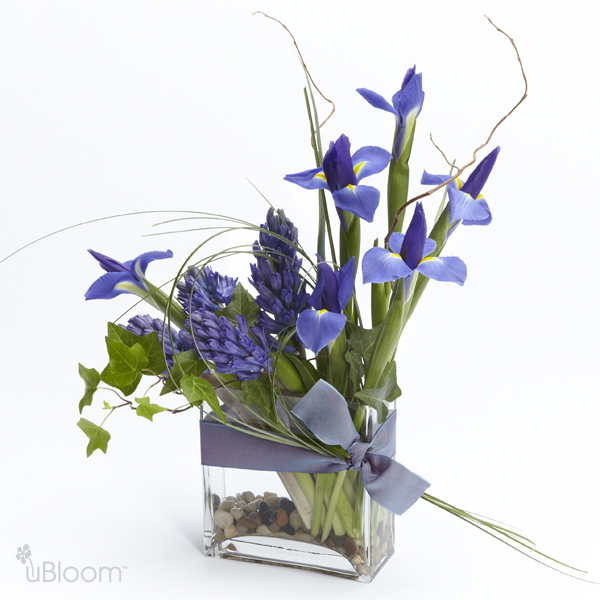